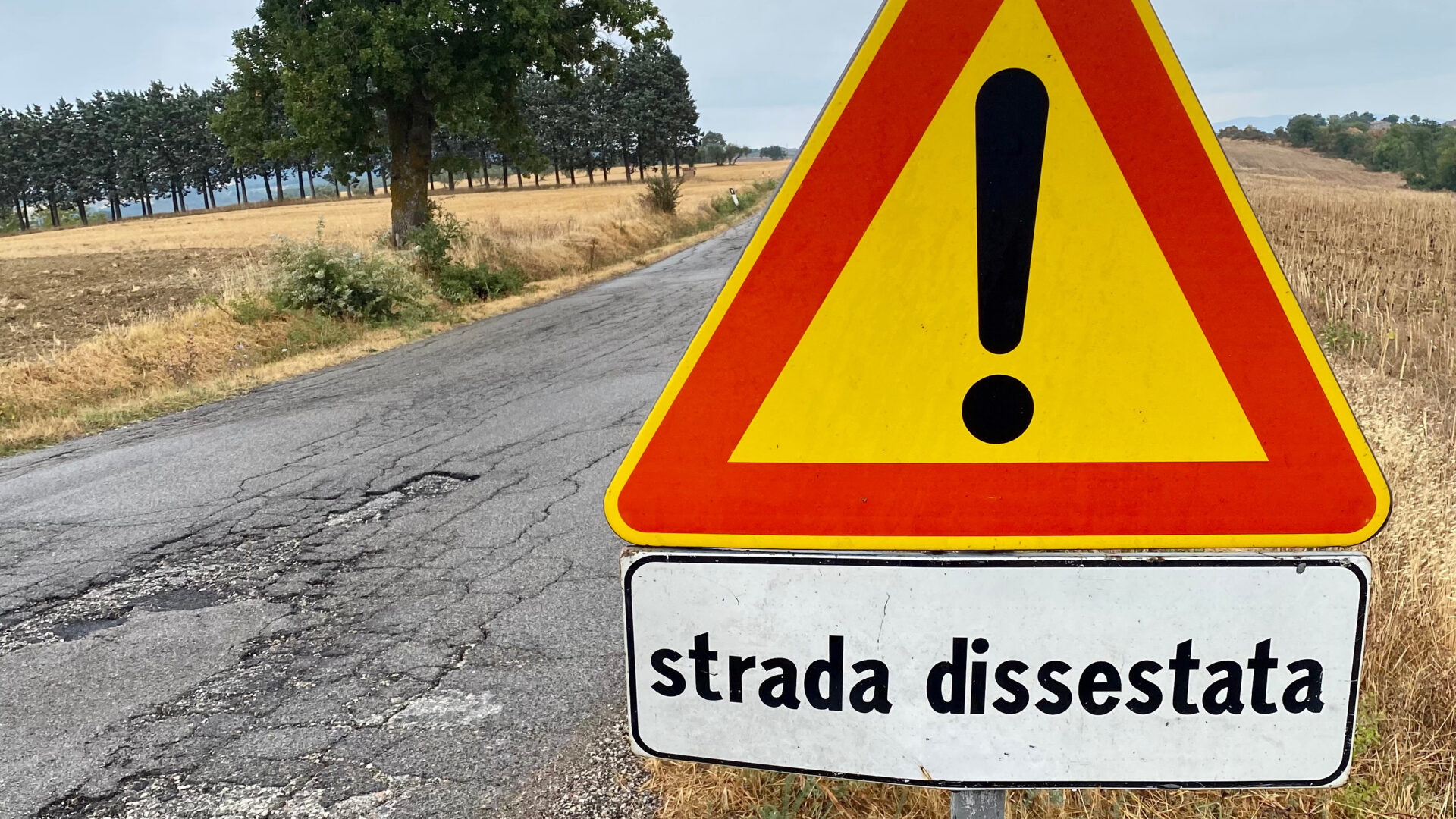 Even Caesar had to struggle with Italy’s desolate roads

The pityful condition of Italian roads has a long tradition: In 50 BC, senator Lactus Bifidus was responsible for the development of the Roman road network. However, he preferred to invest the money entrusted to him in one or the other orgy in his stately palace rather than in the maintenance of the traffic infrastructure. As a result, the main roads of the Roman Empire, which had once been built under Caesar, deteriorated to such an extent that soon one pothole the size of a wagon wheel followed the next.
At least this is the picture painted by the authors of the 37th Asterix volume: the egotistical Lactus Bifidus wants to divert attention from his evil deeds and organizes a chariot race across the Roman „Caliga“. Only to prove what a magnificent state the transport network is in reality.

Of course, the whole thing ends in a fiasco for the kleptocrat, as broken axles and wagon wheels pile up, making even the last praetorian aware of the miserable state of the roads as a result of the race.
Since then, things have not gotten much better with the roads in Italy. On every vacation between South Tyrol and Sicily, the whole family fervently hopes to get as far as Tuscany without a puncture. And when the shock absorbers have held up back to the Brenner Pass, the whole car breathes an audible sigh of relief. Made it again. But maybe this is just the inspection obsession that has been socialized and cultivated by the car lobby in Germany: If the seat heating no longer works, you hardly dare go out on the road. Fortunately, the Italians are much more relaxed.

If the nasty roads only cause a few dents and higher wear and tear for cars and trucks, cyclists on Italian tar sometimes become an endangered species: At the Grandfondo Riccione, it was above all the cobblestones typical in the Italian borgos that required more riding talent than expected. In the 2018 Giro d’Italia, the final stage in Rome was neutralized because the roads were in an unacceptable condition. And as I bump my racing bike through Umbria and the Marches in 2021, I wonder how you can even hold a bike race on these roads without a guilty conscience.

It’s no wonder that gravel bikes are so popular in Italy. And ultimately it’s just a question of material, because the potholes, gravel sections and concrete strips have existed on Italy’s roads for decades. Who arrives there – like me – with a pressure of seven bar on the only 25mm wide tires, must accept the one or other ground-deep surprise after the next curve approvingly. The potholes were already there before me. But once you’ve accepted that the average speed suffers from these holes, the ride is much more relaxed. In this respect, you even have to be a little grateful to the lax road construction authorities. This is how deceleration works.

Here is a classification of the main Italian pothole types, sorted by ascending deceleration factor:

We know that from Germany. It’s not really a pothole, but rather the opposite. In Italy, it’s usually dowelled onto the uneven tar, so a bolt may stick up or a part may be missing. A dosso is particularly challenging in rainy conditions because the rubber can become as slippery as a round-washed bar of curd soap. Contributes to the improvement of riding skills, because a Dosso can usually be jumped crosser-like when going downhill. Be careful when landing, because low-lying trucks often have sharpened nicks in the tar there. Overall, however, harmless, because a Dosso is always signaled.

An Italian specialty. At least I have not seen this concrete line cast into the tar in its variety in any other European country. Stimulates without doubt the attention of the cyclist, in fact lies 30-40 cm from the right edge of the road. That’s exactly where you would actually ride. But it’s better not to, because a) there is always a small offset between the concrete and the tar, and b) the concrete is more slippery than the tar when the road is wet.
It is one of Italy’s unsolved mysteries why the strip is not paved over, but simply covered with concrete.

This crack isn’t really dangerous, although for accident prevention purposes, you ride your bike a little further to the center of the road. This makes overtaking more difficult for motorists, but most locals are likely to feel sorry for those on such pitifully thin tires on Italy’s desolate back roads anyway. The fact that drivers forget to keep their distance when overtaking is usually just because they are in a terrible hurry. They don’t mean any offense, as they do in Germany.

Everyone knows the „cheating tube“ from the hardware store. Conceals old boron holes, incorrectly hammered nails and the deep scratches on the walls in the stairwell from the last move. Looks good for a while, but doesn’t last long. Still often finds application on Italian back roads. But does not solve the real problem, because the cracks of the underlying layer come through after only a short while. Care should be taken with finishing filler, especially at the verge, because it is usually not designed with much care. And once a road has been filled with filler, the cracks are usually even deeper than on an unfilled surface.

Tree roots are a natural enemy of a road builder. If left untreated, they develop a remarkable stamina over the years, with which they deform the tar layer, which has softened in the summer heat, to their liking. Rarely to the delight of cyclists. At best, one hops awkwardly over it like a pregnant rabbit; at worst, one overlooks the distortions and becomes a victim of the road’s poor substructure. Underneath the paved surface layer there is actually a binder layer and a base layer that are supposed to make life difficult for the roots. On Italian back roads, this substructure is often omitted. No one will see it until nature takes over in a few years. Until then, one or the other cyclist has already been catapulted from the tar.

Usually comes without warning, because the road is still accessible. Usually requires a courageous grip on the brakes (always both!), because you do not immediately overlook the depth of the holes and the curvature of the patches. In the best case, at full throttle only the chain hits the chainstay, in the worst case you get a puncture in front. Ungrateful in the heat, because younger tar patches can be as soft as fresh cow dung. And in damp conditions difficult anyway, because fresh tar can be as slippery as a polished bowling alley. Bottom line: take short and straight pieces at full throttle. Longer or curvy pieces require more cautious driving. The patchwork is a little dangerous when the road leads downhill after a bend.

Also called a quarry pond. If you hit such a black hole at medium speed, it can affect the front wheel. In wooded areas and floodplains often accompanied by turbid water deposits that allow the depth of the hole only guessed. If you are wrong in your assessment, you may pay for it with a somersault over the handlebars. Most often announced by a dirty road, often at the transition to gravel roads. Dangerous, especially in a group, because at high speed the fourth rider at the latest can no longer avoid it.

Most frequent anomaly in Umbria and Tuscany. Sightings also in Liguria. A fracture that stretches in length. Often overgrown and with considerable and sometimes surprising cavities. Death sentence if you catch the drilldown with the front wheel. Life-threatening if it comes downhill after a bend.

Particularly challenging are alternating openings that occur on different sides of the road. Especially since the motorized oncoming traffic also likes to drive out of the way of these tarred obstacles and thus possibly finds itself on the wrong side. Namely, where you are currently avoiding a crack-up yourself.

These anomalies are now rather the norm in large parts of central Italy. They are really dangerous because they are so unpredictable. Better to get off the gas to spare man and material.

But there is also that: There I bump through the hinterland of the Marche, register out of the corner of my eye a warning sign „Strada dissestata“ (which means “ run-down road“) with a speed reduction to 30 km/h – and then comes this:

Five kilometers of dreamy tar. Probably just finishing filler, but even that can make you happy.

Nevertheless, it’s better to take a gravel bike on your next vacation in Italy. Then you’ll be happy about a piece of beautiful tar – and no longer annoyed by the legacies of Lactus Bifidus.