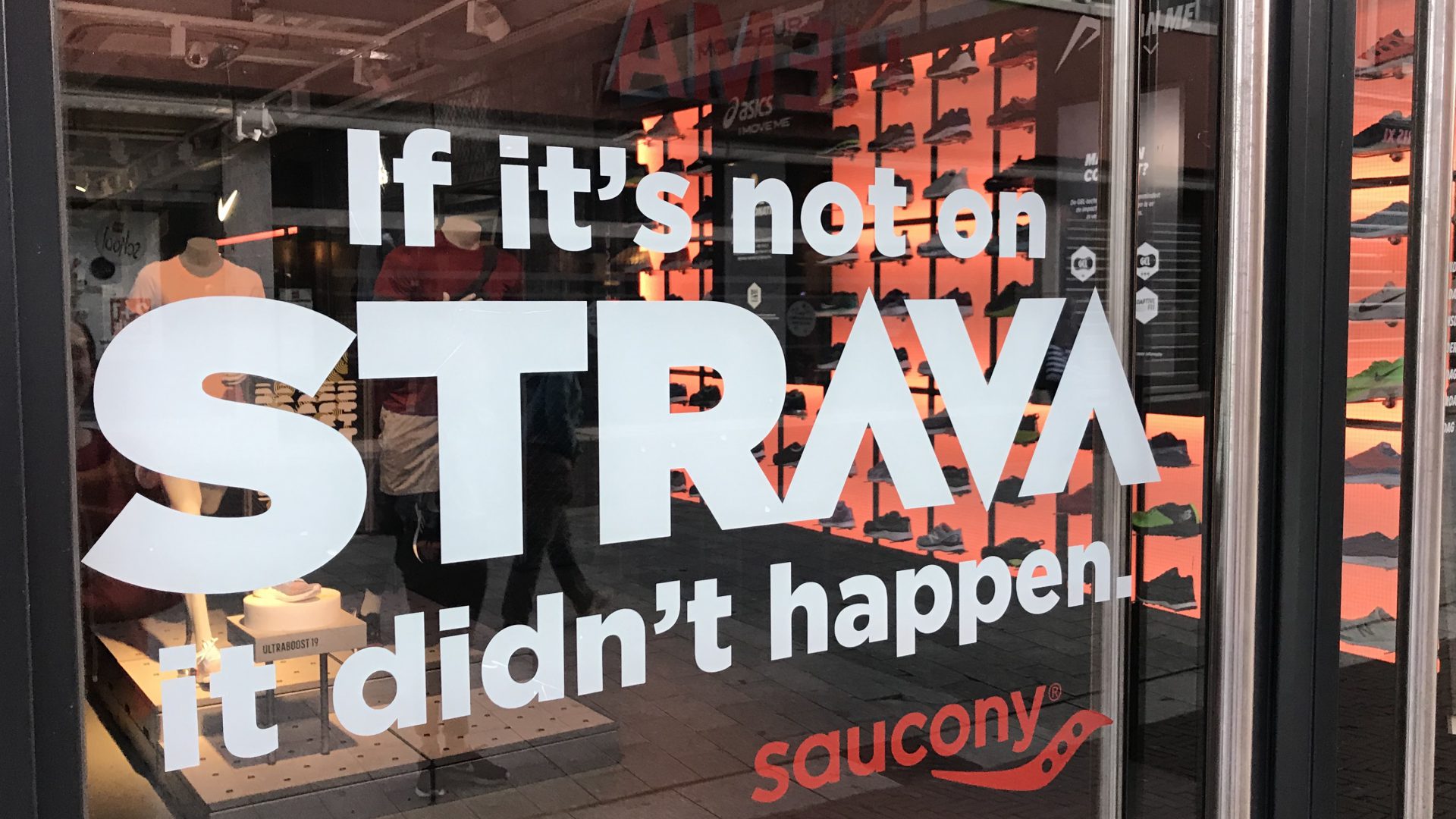 „Look for a firm foothold, sometimes the car brakes abruptly. It still can’t tell the difference between an overtaking and a parking car.“ It’s not that easy, that sort of thing. Sometimes it’s hard for me too. For example when I want to go home from the Christmas party at half past three at night.

In anticipation of an emergency stop that will throw us right through the car, I cling to the holding bar with both hands. The car looks like the Griswolds Tartan Prancer family from Albania. So it does exist after all. Fortunately our trip is shorter, we don’t want to go to Walley World.

The Prancer brakes like a learner driver who confused clutch and brake in his first practical hour. The car comes to a crashing halt. No wonder, the vehicle only knows zero and one and nothing in between: We are sitting in a self-propelled bus in Drimmelen in the Netherlands. It connects the old and the new marina on a distance of about one kilometre. A stewart accompanies the journey because not everything goes smoothly after all. That makes things a bit absurd, but somehow you have to start. At the end of the 1860s, the British Red Flag Act obliged motorists to let a pedestrian walk with a red flag in front of every vehicle. From Great Britain we know one or the other legislation surprising for continental Europeans, but the Red Flag Act made sense: The speed was limited to 2 miles per hour in urban areas. We are not much faster with the Prancer today either.

So it will be a few more years before we are surrounded by reliable self-propelled cars. Superhuman visions are the lubricant that gets things rolling. Otherwise we wouldn’t be on the moon today, and Elon Musk would spend his PayPal millions sipping cocktails in Hawaii or Tahiti.

Artificial intelligence, then. On the way to the self-propelled car there are still some challenges in other areas of life that may be easier to solve. For example, the problem that my coach costs me half a fortune every month. Admittedly, the good man has a hard time with me because I don’t have a real goal, I constantly change my mind and at full throttle I just come along still slowly compared to real racers. To be honest, he does a good job for the price.

Nevertheless it costs. My first thought: I have to be able to do that myself. Can’t be that hard. Others have also learned. I want to understand how to arrive at the specific intervals, how long they should be, how often they have to be repeated and how the whole thing fits into a big plan.

I get the standard work, the training bible for cyclists by Joe Friel. Friel is something like the Jesus among coaches. Otherwise the title of the book would also be presumptuous, but Jesus is allowed to do that. Unlike Jesus, however, Friel is paid princely for his services, and this might also explain why the training Bible is missing the New Testament. What interests me most is how the goals are translated into concrete, structured training. While reading his Bible, I increasingly wonder how he wants to resolve this on the remaining pages – and I am eventually disillusioned. He does not become so concrete, and probably not only because he would reveal the secret of his success. There are simply so many parameters that you can turn on that you can’t do justice to the right approach in a book. Friel can’t do that either. I am disappointed, but the book is still a good choice to get an understanding of the overall context.

After reading the Bible, I was a little smarter, but no further. I still had my account at TrainingPeaks, but didn’t want to pay a coach anymore. That must be more intelligent. I don’t mind artificial intelligence, the mechanisms behind it are clear.

In a nightly research, meanwhile my problem caused me sleepless nights, I came across Xert. Xert promises exactly what I am looking for: Intelligent and structured training based on a pre-defined driver profile and historical training data. And this in comparison to a coach at flea market prices. Exactly mine.

Xert advertises that an FTP test is no longer necessary. Never again. This promise alone is a good reason to try Xert. Nothing is more cruel to me than to have to constantly give full throttle for 20 minutes in my pain cave. Provided that the entire training will be based on this one number. If you catch a bad day, the results are useless. Xert, on the other hand, draws a „fitness signature“ from all past training sessions, which does not only refer to the magic FTP, but also takes significantly more factors into account.

This is also quite reliable if you have chosen the right type of rider beforehand. In addition to the fitness signature and driver type, the selected „ramp rate“ determines the workouts that are then made available. And this is where Xert’s strength lies: the number of different workouts alone is worth the price for the premium version. Xert either randomly selects a suitable workout or you do it yourself. You can also use the planner to plan your workout in advance. The intensity of the workouts is actually ideal for the training condition, so the fitness signature seems to be the right basis.

A fancy feature is the Pacer, which allows you to visualize your fitness based on the ramp rate and the last seven days. Xert’s currency is XSS, which is very similar in definition to TrainingPeaks TSS. At least for me 10 XSS correspond to about 9 TSS. At first I was a little annoyed because I had to train 10 percent more each time than planned.

You can still live well with the XSS deviation. Xert’s technical hurdles weigh heavier and their basic assumption is somewhat too reduced for my terms.

Unfortunately, Xert does not offer synchronization with the Elemnt Bolt. This would be the easiest way to control the turbo as well as to ride the training units outside. Probably Wahoo requires a considerable „integration fee“, because so far this is only possible with TrainingPeaks. Another obvious solution would be to import Xert’s workouts into TrainingPeaks and then transfer them to the Elemnt – that’s just not possible. TrainingPeaks understandably does not offer such an import because it would cannibalize their business model.

Xert therefore offers apps for the two most important mobile operating systems that can control the trainer as well as track wattage and heart rate. A nice idea, but unfortunately the iOS app is based on the new Bluetooth FTMS (Fitness Machine Service) standard, which not all turbos are capable of yet. Not mine either, so the app is useless for me. So I bought a used Garmin Edge 520 that can talk to Xert about connectIQ.

A horrible part, this bike computer. The Edge loses all sensors at least once per workout. And once the phone is disconnected, I have to switch Bluetooth on the iPhone off and on again. It all works when I’m in the pain cave, but what do I do outside? Apart from the fact that I now always have to train with two computers.

Then there is the „somewhat too reduced basic assumption“: With Xert, a program has exactly 120 days, which are subdivided into the different phases. If you come from TrainingPeaks, this is an enormous hurdle. There you create an annual plan in which you – following Friels Old Testament – plan your season on the basis of TSS. This is not possible here, and the 120-day procedure is very simplified. You can use several programs one after the other, but this is not at all the best possible solution.

And then there is a real problem. One that is really not acceptable in today’s world: I can live with the fact that XSS are not equal to TSS, that my turbo doesn’t speak the new Bluetooth stack and that 120 days can’t display a serious training program. What I find difficult is the poor usability. In Xert there are so many places that are misleading or so crude that only an engineer can be behind them. Definitely not a UI/UX expert. There is for example the Planner, in which you can set workouts in the calendar, which should be started automatically on that day. But if you have selected a certain workout in addition, the selected one will be played (and not the one from the planner). Once a workout has been selected, it can’t be deselected – or I haven’t found the function yet. There are numerous shortcomings alike in Xert.

Addendum 21.12.2019: Meanwhile it turned out that Xert had a bug after the last release of their platform. In the Planner you can plan workouts on a certain day at a fixed time. If you don’t run them at that exact time, they will be moved to the list of uncompleted workouts and disappear from the calendar (in my opinion, the right thing to do would be to leave them in the calendar and mark them red). Such a moved workout remains „selected“ until the next Planner entry will be played at the next training. That in itself is quite unusual – and that’s where the mistake was. Only the manually selected workout was played, but not the one that was moved from the Planner.
Confusing? Absolutely! With some investment into the platform’s usability, this could be handled much smarter. Nevertheless: The cause for my confusion was a software error, for which Xert apologized and which has been fixed in the meantime.

If Xert fails, it’s because of the bad usability. After all, the company maintains a flawless support. There is probably only one person behind this, Scott, who often answers within a few minutes. That makes the pain bearable.

Does it now make any sense?

Initially, I ran TrainingPeaks in parallel to see how Xert rated the workouts. Over time, despite reasonably identical basic data, there was a deviation of about 10% at the expense of training peaks.

Both platforms require a certain amount of know-how in order to benefit from it. Friels Bible is the right thing to at least familiarize yourself with the basic concepts of training. Ideal would be to combine the comfort and functionality of TrainingPeaks with the AI of Xert. For me, the annual planning in TrainingPeaks with subsequent TSS tracking is one of the most important functions – besides the synchronization of the planned workouts with my bolt, of course. I wouldn’t use Xert alone, the 120-day concept is too short for me. Does TrainingPeaks have an economic interest in a Xert-AI? Probably not, because that would devalue the coaching concept and the shop with the training plans. AI training definitely is the future, at least for hobby cyclists,, and TrainingPeaks has to be careful not to become Kodak among the training platforms. But as long as Xert can’t score in usability, there’s no danger.

And we’ll see in summer whether it all worked out. In 2020 there will only be one event on the list – more on that later.

Dec 18, 2019 – please note: In the first edition of this post I wrote that a program has 180 days. This is wrong, as one can easily find out when reading the Xert pages. Thank you, Armando, for the correction (see comment from Xert CEO below).